The Jamaican flag was raised on Independence Day for the first time, August 6, 1992. The flag signifies the birth of the nation. It’s a great symbol in Jamaica as it brings memories of the past achievement to mind as well as giving inspirations towards further success.
The flag is flown on various triumphant occasions, showing the Jamaicans people pride to their country as well as the flag itself.
Many Jamaicans are proud of their country and the flag. Thus, this prompts both Jamaicans and non-Jamaicans to buy Jamaican flag wall art at various outlets for their own use. There are plenty Jamaica Flag Wall art available that you can buy. 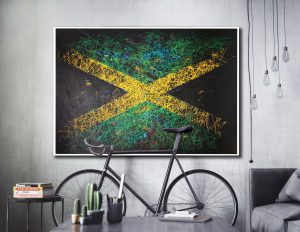 Design
The Jamaica flag was designed by bipartisan committee of the Jamaican House of Representatives. The Jamaican flag has a diagonal cross with four triangles placed on sides facing each other. The color of the diagonal cross in Jamaican flag is gold, both top & bottom triangles are green, then, fly (side) and hoist triangles are black in color.
The Symbolism
Official Jamaican National Flag interpretation is The sun shineth, the land is green, and people are strong and creative. The green color represents hope as well as Jamaica’s plenty agricultural resources. The gold color in the Jamaica Flag is associated with the country natural wealth and the sunlight beauty. The black color depicts the nation’s people strength and creativity,
The Jamaican Flag Code for Use
There are various guidelines for the correct handling and displaying flag layer out by the National Flag Code. Here is the selection of some of the regulations.
• It should be referred to as the sacred emblem of the nation
• The Jamaican flag never should it be allowed to touch either floor or ground.
• The Jamaican National Flag should never be of smaller size than any other flag that is flown at the same period.
• When the flag has worn out and the only option is to replace it, it should-be burnt privately and never should it be used in any other way other than the original and the official one it was designed for.
• You should not place another flag either on the top or to-the-right of the Jamaican National Flag, except at consulates, embassies, and missions.
• Never raise the foreign flag in public, not unless if the Jamaican flag is flown also, except at various foreign embassies, missions as well as consulates. 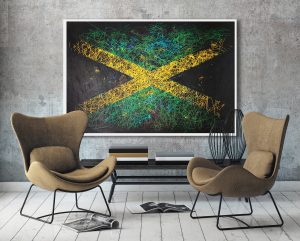 • The Flag should never be draped over the vehicles except on police, military and state occasions.
• It should not be used or flown for the decorative purpose on a temporary use and likely to be discarded later unless it’s on the state occasions.
• At civilian premises, the flag is recommended to be hoisted at 8.a.m and lowered during sunset, except if after sunset is illuminated clearly either by a focused spotlight or floodlight.
• The office of prime minister may instruct flowing the National Flag half mast signalling mourning period.
• Never should Jamaican flag be used in draping the non-national coffin.
To wrap it all, the Jamaica National Flag is a great national symbol that represents the nation worldwide. Jamaicans love their flag as well as the country following the code of usage of the flag. To demonstrate the full love of their country and flag, they opt to buy wall art designed like Jamaican National Flag.

"Everybody is an artist but only the artist knows it". Pierre Bismuth